Meeting the Challenges, Embracing the Opportunities in St. Louis 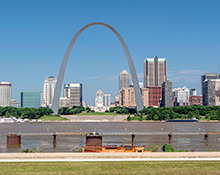 St. Louis has long served as a crossroads for American industry with traditional manufacturing driving its economy through many periods of growth.

Now in the digital age this metropolitan region in the center of the nation’s heartland finds itself at its own crossroads: embracing a future powered by new tech‐focused industries while shedding some of its traditional – but waning – economic drivers.

A microcosm of major economic trends throughout the United States, the St. Louis market presents many opportunities for successful real estate development within key submarkets. The metropolitan area’s population has held steady, with slight growth from 2010 to 2014, and shows signs of picking up speed as young singles and empty nesters move back to urban areas. READ MORE