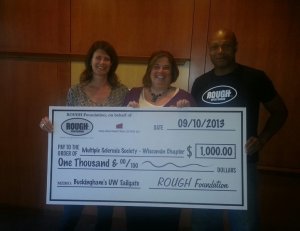 MADISON, Wis. (September 16, 2013)—ROUGH Sportswear and Buckingham’s Bar & Grill alliance to raise money for area non-profits has proven to be a successful combination as individuals and companies step up to donate to seven great causes.  “Even before our first tailgate party, both Sara Investments and Neider & Boucher law firm heard about what we were doing and contacted us to say they want to help too, “ reports ROUGH CEO Trent Jackson, a former Badger basketball standout. “Not only that, Badger fans have really stepped up to the plate. At the second tailgate, they increased their cash donations by 25%.”

Through corporate and individual donations at the tailgates, ROUGH Foundation, the non-profit arm of the apparel company, has donated $1,000 each to the Boys & Girls Club of Dane County and National Multiple Sclerosis Society Wisconsin Chapter. The next non-profit being represented at the September 21 Badger football game tailgate is the local chapter of the American Parkinson Disease Association. A total of seven non-profits will benefit from each UW home football game tailgate.

About ROUGH: Madison-based ROUGH Sportswear is a sports apparel company launched in December, 2011.  For every ROUGH Sportswear purchase, 10% of sales are given to non-profit organizations through the ROUGH Foundation, which as given $11,000 to area non-profits to date. Learn more at http://roughsportswear.com/about-us.